Das Ist Lustig headlines the Family Stage again this year and is a crowd favorite, especially when Valina starts her antics. Das Ist Lustig means “that’s fun”, and the band performs for audiences of all ages, and is a fan favorite at the Island Oktoberfest. 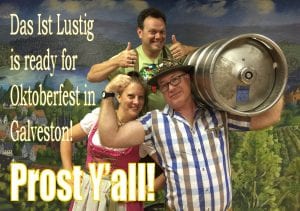 Das Ist Lustig offers variety that no other band does with their audiences. Make sure to ask them for the Bench Dance, or to go Cuckoo with you. They even have their own twist on the traditional Schnitzelbank. And with folk dances, the more the merrier, so join in! It’s okay if you don’t know how to dance – if you can walk, they’ll show you how to do the dance.

Valina Polka of Das Ist Lustig will also serve as MC for the Family stage. Valina is fascinated by the multitude of talent featured at events like this. She is absolutely thrilled to be the emcee again for the 35th annual Galveston Oktoberfest Family Stage.
Visit: prostyall.com 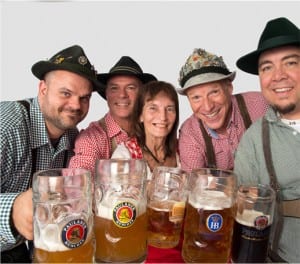 Back this year on the Music Stage Saturday Night , Randy Adams and Auf Geht’s will perform, That means “Let’s Go!”, and they will bring lots of happy music and serious fun! Randy and gang specialize in the music of the Alps – Bavaria, Tirol, Rheinland, Germany, “and Brazoria County Texas” (Yee-Haw!) featuring lots of yodeling (Alpine and Western!), alpenhorn, musical handsaw, dazzling accordion and trumpet instrumentals!

They LOVE what they do! We invite you to share some good fun and Gemutlichkeit (and maybe a beer or two!) with Auf Geht’s. Komst du Viele Spass!! (Have lots of fun!!)
Visit: aufgehtsmusik.com 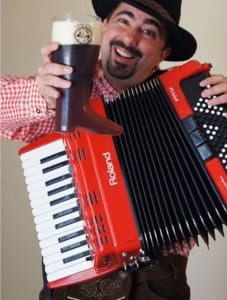 New this year to the Music Stage during the day on Saturday. From Austin TX, Chris Rybak and his band. Like a wagon master leading a wagon train, the Accordion Cowboy, with a crack of his whip, leads you through many colorful images of the grand state of Texas, featuring the German and Czech heritages.

From Polkas to Two Steps, dance and listen to the mighty heartbeat of Texas. Lead by this master musician, let the music allow your imagination roam to images of Texas, both past and present. Dance halls, bluebonnet fields, grazing longhorns, and slow moving rivers winding through the plains. Along the way, you will be treated to honky-tonk piano, romantic waltzes, and boot stomping accordion and fiddle medleys. 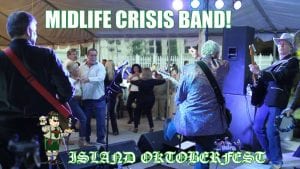 Featuring local professionals, “Mid Life Crisis” will play to a loyal local following and a growing new fan base. For fifteen years now, this band of local doctors, attorneys and professionals has been entertaining on Galveston’s Strand and at Galas and Charitable events.

A tremendous hit and crowd favorite since 2011, the band returns this year to Oktoberfest, and they will be featured on Friday night from 7:00 pm until 11:00 pm. Midlife Crisis specializes in music from the 50’s, 60’s and 70’s, adding new hits in current favorites. 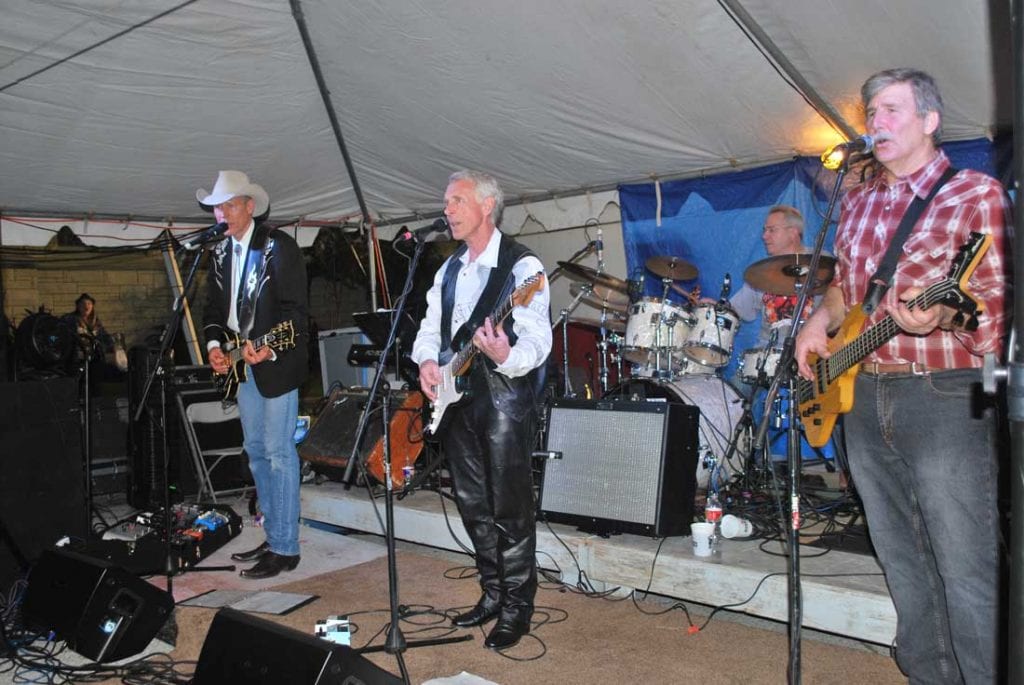 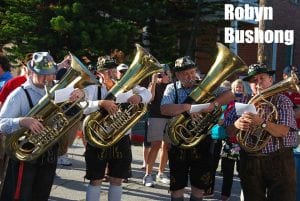 No instrument is more identified with German and Czech music than the Tuba. The TubaMeisters, a Tuba/Euphonium quartet, go far beyond the oompah tradition, by presenting a rich and varied entertainment. All the old standards are here, with other music you’ll enjoy. There’s also Austrian, Czech, Slovenian, Spanish, and Mexican, and even a few Country-Western and Rock tunes, as well, with vocals in five languages.

Back again by popular demand, the crowd pleasing part of their act is their strolling performances, interacting with the crowd up close and personal. TubaMeisters will perform on the Family Stage on Friday and can be found strolling through the crowds periodically having fun with the guests.
Visit: thetubameisters.com 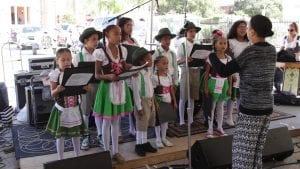 Fanfare! returns this year bigger and better than ever. In this its sixth year, the Lutheran Music Academy has grown to over 70 students learning music and art in an after school program designed to introduce the participants to fine music theory and performance.

The Academy teaches Voice, Piano and Keyboard, Violin, Guitar, Music Theory and Art. June Pulliam is the Executive Director, and the school is staffed by very talented professionals committed to music and education throughout the Galveston County area. See Fanfare! on Saturday afternoon.
Visit: Fanfarelma.com 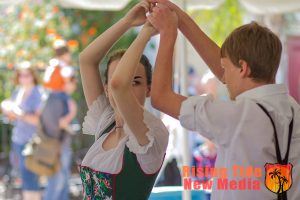 Returning this year to the Family stage is the Deer Park Folk Dance Troupe. This respected group of young men and women study German at Deer Park High School and are in their 10th year of existence. Their enjoyment of the German culture, the fellowship they have found with each other, and their dedication to practice has made them successful in Regional and State German competitions.

They proudly perform at the Tomball German Heritage Festival in the Spring and community events in Deer Park. The Island Oktoberfest is excited to have this great group of young people performing again on Saturday. 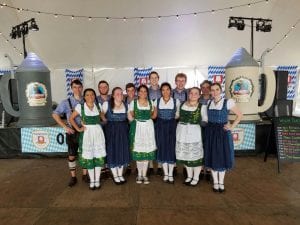 The Keine Künst Folk Dance Troupe is and will be a reminder of German history to those of the United States who do not know or have forgotten about it. The members of Keine Künst have a passion and talent for what they do, and many of them began as early as their freshman year dancing to entertain others and enjoy themselves. The group also serves as a statement to do what you love and have passion for, and to be proud of what it is that you’re doing.

Keine Künst’s goal is to spread the word and increase popularity of activities similar to this not only in Texas, but also in the U.S.. However, the troupe’s main goal is to inspire, whether it be to folk dance or create a name for something that YOU love.

The Rathkamp German Folk Dancers (Die Rathkamp Deutsche Volkstanzgruppe) is a family-oriented group established in 1959 by Monroe and Betty Rathkamp. The group strives to preserve and perpetuate German and Germanic folk dances, customs, and culture, and to cultivate a public appreciation of these by dancing in authentic costume accompanied by authentic music.

The repertoire includes dances from all over Germany, Austria and Switzerland: beautiful and graceful Ländlers with their many figures; Schuhplattlers (foot slapping dances) from Bavaria and Austria; guild (occupational) dances such as Mühlradl (Millwheel), which represents the grinding of grain, and Die Hammerschmiedgesell’n (blacksmith journeymen); wedding dances; and many other folk dances. The dancers are from the Houston Area and are returning for their second year to Oktoberfest. See them on Saturday at the Family Stage.
Visit: rathkampgermanfolkdancers.org 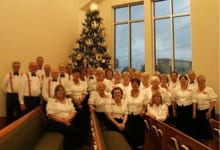 The New Braunfels Gemischter Chor Harmonie is an ethnic Choir who enjoy singing and having fun and fellowship (Gemütlichkeit) while preserving the German language and traditions. Some are fluent in German, while others are using the choir to help them learn the language. Most of all they share a love of singing in German.

They hail from New Braunfels and surrounding German enclaves. Though 75 years strong, they are stepping out from New Braunfels for the first time, and Oktoberfest is happy to see them return again to our entertainment lineup keeping the German traditions alive. See them on Saturday at 3:15 and 6:45 on the Family Stage.
Visit: nbharmonie.org 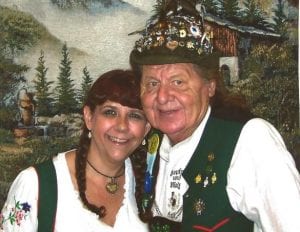 Klaus and Becky, the Fragstein Duo, join Oktoberfest this year bringing their unique blend of German Music, Country, 50’s Rock & Roll, and music from around the world to the stages. Klaus’ music career began at the age of six in Germany when he sang with the Hannover Boys Choir and also with the Vienna Boys Choir. Klaus returned to Germany to spend a year on tour and made several guest appearances on the popular television show, “Musikladen”.

He has to his credit several recordings made in Nashville, Tennessee, and Germany under his stage name of Cliff Nelson. Becky is first generation German. She was born in Denver, Colorado. Becky began her musical career when her “Oma” bought her first accordion at the age of 8. Klaus and Becky now live in Lumberton, Texas. Klaus sings in 12 different languages!!!!! So come on out and see Klaus and Becky where you can dance along, “Schunckel” along, and sing along with their musik. They will be performing on the Family Stage on Saturday. 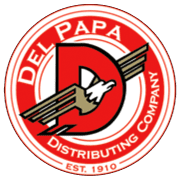