Galveston’s Island Oktoberfest was first celebrated in 1981 by members of First Lutheran Church who traced their roots back to German immigrants of the mid 1800s. What started simply as a “fall activity for the congregation and their friends and neighbors in the courtyard in front of the Parish Hall” has grown and expanded into what is now Galveston Island’s premier fall event attracting over 15,000 “friends and neighbors” for this fun two day event! 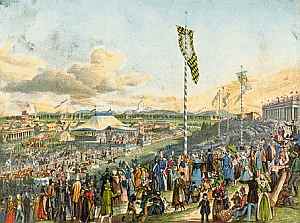 Historyically, Oktoberfest is a 16-day festival that is held each year in Munich, Germany, running from late September to early October. It is one of the most famous events in Germany and the world’s largest fair, with some six million people attending every year, and is an important part of Bavarian culture. Other cities across the world also hold Oktoberfest celebrations, modeled after the Munich event.

The Munich Oktoberfest, traditionally, takes place during the sixteen days up to and including the first Sunday in October. In 1994, the schedule was modified in response to German reunification so that if the first Sunday in October falls on the 1st or 2nd, then the festival will go on until October 3 (German Unity Day). Thus, the festival is now 17 days when the 1st Sunday is October 2 and 18 days when it is October 1. The festival is held on an area named the Theresienwiese (field, or meadow, of Therese), often called d’Wiesn for short. 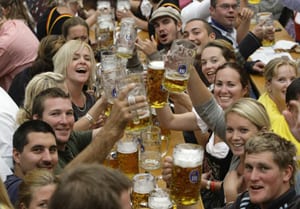 Origins
The original “Oktoberfest” occurred in Munich, on October 18, 1810: For the commemoration of their marriage, Crown Prince Ludwig (later King Ludwig I) and Princess Therese of Saxe-Hildburghausen (namesake of the Theresienwiese festival grounds) organized a great horse race (the marriage took place on October 12; the horse race on October 17 – therefore, there are different dates named as being the first Oktoberfest). 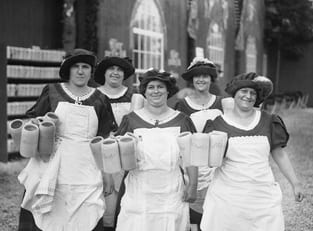 In the year 1811, the Oktoberfest was cancelled since Bavaria was involved in the Napoleonic war. In 1816, carnival booths appeared. The main prizes were silver, porcelain, and jewellery. In 1819, the founding citizens of Munich assumed responsibility over festival management. It was agreed that the Oktoberfest would be celebrated each and every year without exception. Later, it was lengthened and the date pushed forward, the reason being that the end of September in Bavaria often has very good weather. The high temperature in the first week of Oktoberfest nears 19°C that stimulates the thirst of the visitors. However, today the last week of Oktoberfest is still in October.

To honour the marriage of King Ludwig I and Therese of Bavaria, a parade took place for the first time in 1835. Since 1850, this has become a yearly event and an important component of the Oktoberfest. 8,000 people – mostly from Bavaria – in traditional costumes walk from Maximilian Street, through the centre of Munich, to the Oktoberfest. The march is led by the Münchner Kindl.

Bavaria Statue Above the Theresienwiese
Since 1850, the statue of Bavaria has watched the Oktoberfest. This worldly Bavarian patron was first sketched by Leo von Klenze in a classic style and Ludwig Michael Schwanthaler romanticised and “Germanised” the draft; it was constructed by Johann Baptist Stiglmaier and Ferdinand von Miller.

In 1853, the Bavarian Ruhmeshalle was finished. In 1854, 3,000 residents of Munich succumbed to an epidemic of cholera, so the festival was cancelled. Also, in the year 1866, there was no Oktoberfest as Bavaria fought in the Austro-Prussian War. In 1870, the Franco-Prussian war was the reason for cancellation of the festival. In 1873, the festival was once more cancelled due to a cholera epidemic. In 1880, the electric light illuminated over 400 booths and tents. In 1881, booths selling bratwursts opened. Beer was first served in glass mugs in 1892. Oktoberfest at night with view of Löwenbräu tent.

At the end of the 19th century, a re-organization took place. Until then, there were games of skittles, large dance floors, and trees for climbing in the beer booths. They wanted more room for guests and musicians. The booths became beer halls. In 1887, the Entry of the Oktoberfest Staff and Breweries took place for the first time. This event showcases the splendidly decorated horse teams of the breweries and the bands that play in the festival tents. This event always takes place on the first Saturday of the Oktoberfest and symbolises the official prelude to the Oktoberfest celebration.

In the year 1910, Oktoberfest celebrated its 100th birthday and 120,000 litres of beer were poured. In 1913, the Bräurosl was founded, which was the largest Oktoberfest beer tent of all time, with room for about 12,000 guests.

From 1914 to 1918, World War I prevented the celebration of Oktoberfest. In 1919 and 1920, the two years after the war, Munich celebrated only an “Autumn Fest”. In 1923 and 1924, the Oktoberfest was not held due to inflation. In 1933, the Bavarian white and blue flag was replaced with the standard swastika flag. From 1939 to 1945, due to World War II, no Oktoberfest took place. From 1946 to 1948, after the war, Munich once again celebrated only the “Autumn Fest”. The sale of proper Oktoberfest beer was not permitted; the guests had to make do with beer that had an alcohol content under 2%.

Since its beginnings, the Oktoberfest has thus been cancelled 24 times due to war, disease, and other emergencies.

Frisbee Carousel in the Heat of the Day
Since 1950, there has been a traditional festival opening: A twelve gun salute and the tapping of the first keg of Oktoberfest beer at 12:00 by the incumbent Mayor of Munich with the cry “O’zapft is!” (“It’s tapped!” in the Austro-Bavarian language) opens the Oktoberfest. The Mayor then gives the first beer to the Minister-President of the State of Bavaria. The first mayor to tap the keg was Thomas Wimmer. 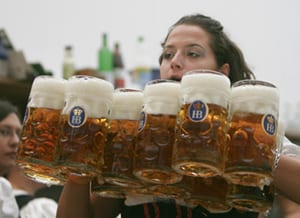 By 1960, the Oktoberfest had turned into an enormous world-famous festival. After this foreigners began to picture Germans as wearing the Sennerhut, Lederhosen, and the girls in Dirndl. Horse races ended in 1960.

There are many problems every year with young people who overestimate their ability to handle large amounts of alcohol. Many pass out due to drunkenness. These especially drunk patrons are often called “Bierleichen” (German for “beer corpses”).

For them as well as for the general medical treatment of visitors the Bavarian branch of German Red Cross operates an aid facility and provides emergency medical care on the festival grounds, staffed with around 100 volunteer medics and doctors per day. They serve together with special detachments of Munich police, fire department, and other municipal authorities in the service center at the Behördenhof (authorities’ court), a large building specially built for the Oktoberfest at the east side of the Theresienwiese, just behind the tents. There is also a place for lost & found children, a lost property office, a security point for women and other public services.

To keep the Oktoberfest, and especially the beer tents, friendly for older people and families, the concept of the “quiet Oktoberfest” was developed in 2005. Until 6:00 PM, the tents only play quiet music, for example traditional wind music. Only after that will Schlager and pop music be played, which has led to more violence in earlier years. The music played in the afternoon is limited to 85 decibels. With these measures, the organizers of the Oktoberfest were able to curb the over-the-top party mentality and preserve the traditional beer tent atmosphere.

Since 2005 the last traveling Enterprise ride of Germany – called Mondlift – is back on the Oktoberfest. Starting in 2008, a new Bavarian law intended to ban smoking in all enclosed spaces that are open to the public, even at the Oktoberfest. Because of problems enforcing the anti-smoking law in the big tents there was an exception for the Oktoberfest 2008, although the sale of tobacco was not allowed. After heavy losses in the 2008 local elections with the smoke ban being a big issue in debates, the state’s ruling party meanwhile implemented special exemptions to beer tents and small pubs. So, smoking in the tents is still legal, but the tents usually have non-smoking areas. The sale of tobacco in the tents is legal now, but it’s abandoned by agreement.